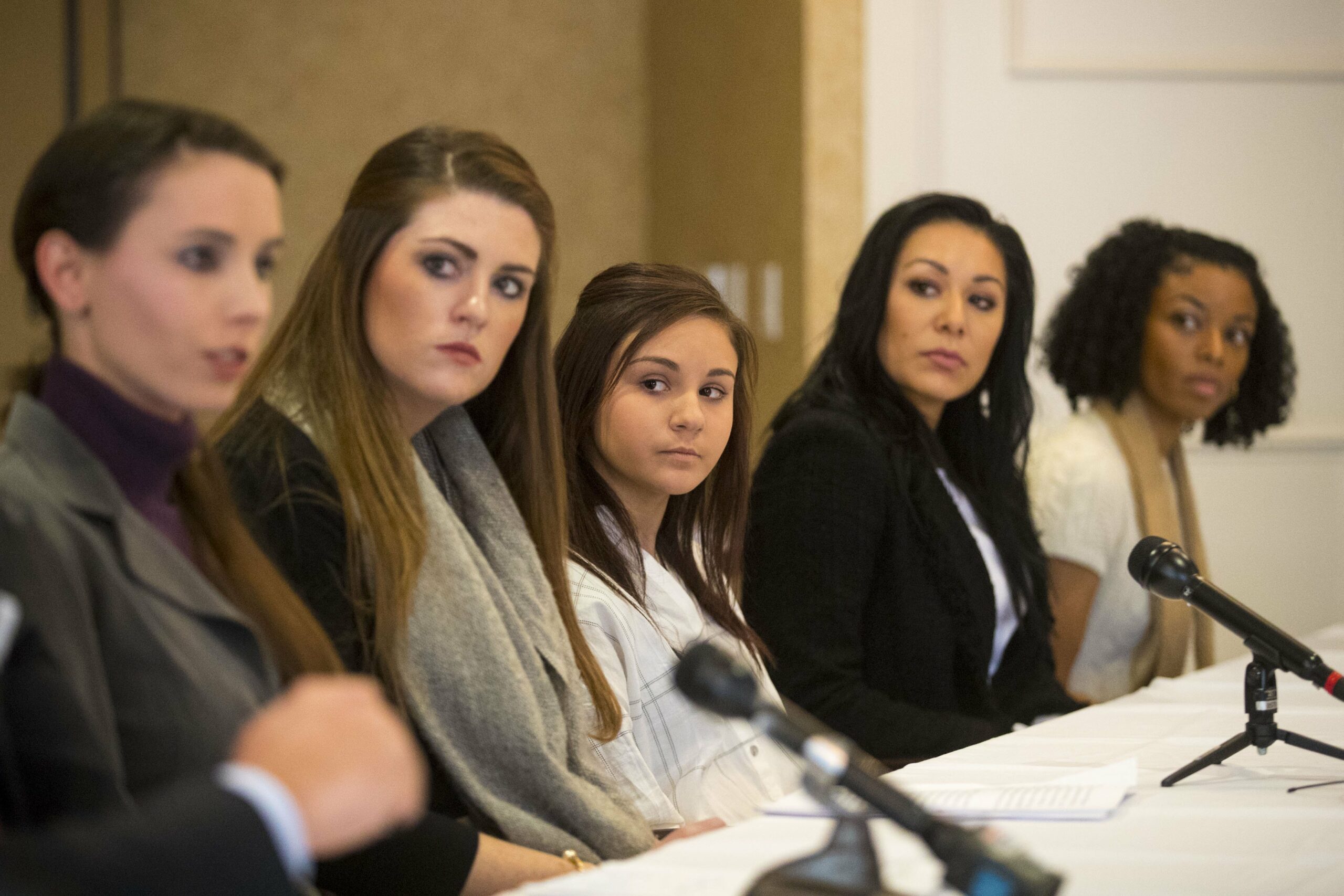 We have barely seen the full legal impact of the Nasser-gymnast sexual abuse cases: Over 140 girls claim he abused them.

I have not seen this covered very much on broadcast television but an horrifying case is playing out in a Michigan court room.

Nassar, 54, of Holt, pleaded guilty in November to 10 counts of first-degree criminal sexual conduct, with seven in Ingham County and three in Eaton County. The low end of his sentence will be between 25 and 40 years in prison, and the maximum sentence can be up to life.

The Michigan Attorney General’s Office, which prosecuted Nassar, said Thursday that it expects 120 women and girls to now give victim-impact statements. More than 140 women and girls have said Nassar abused them.

First, the criminal prosecution will likely not end in Michigan.

Nassar, 54, will almost certainly spend the rest of his life in prison. He has already received a 60-year prison sentence for child pornography charges and he will soon face sentencing in two Michigan counties for seven felony counts of criminal sexual conduct and three counts of criminal sexual conduct. All told, he could end up with prison sentences totaling 150 years to 200 years—and it’s possible he could be prosecuted for still other sexual crimes, including in Texas. Of course, for the more than 150 women who accuse Nassar of sexual assault under the perverted guise of “medical treatment”, no amount of prison time can account for the harm he caused.

After an extraordinary seven-day hearing that drew more than 150 young women to speak out publicly about sexual abuse they said was committed by Dr. Lawrence G. Nassar, the former team doctor for the American gymnastics team, a judge sentenced him on Wednesday to 40 to 175 years in prison.

Second, Nasser himself is already facing a pending civil lawsuit, too, by one victim. I have recommended this for sexual abuse victims. Unlike Nasser, most sex offenders likely will be released in their lifetime. Adult survivors of childhood abuse can still bring suit.

One of the things that has struck Foote the most in his line of work on behalf of victims of sexual abuse is the gaping power disparity that exists between the victims and their abuser. That can be the biggest impediment to bringing such allegations to light; so often, the accused’s status may deter victims from coming forward in the first place.

“The nature of abuse is such that they sort of feel powerless,” Foote said. “It takes a long time for people to come forward. It’s even more pronounced when you’re dealing with someone that’s powerful, well-respected, who works for or is associated with a big institution, and that’s really damaging for people.”

In these instances, Foote has witnessed an interesting phenomenon when victims do come forward, and, as is often the case, connect with each other. Even the simple act of uniting in solidarity, retaining counsel and filing the lawsuit itself, regardless of outcome, can have a cathartic and empowering effect. Several well-known gymnasts such as Raisman, McKayla Maroney, Gabby Douglas and, most recently, Simone Biles have spoken out about Nassar’s abuse and finding strength in rallying together with fellow victims.

The facts of the case have most legal scholars willing to believe there will be very serious consequences for all parties complicit in the abuse. Bringing those parties to account, as well as putting mechanisms in place to prevent it from happening again, needs to be the top priority.

Thirdly, and most interesting to watch, there are major institutions which have the ability to pay substantial sums. “More than 140 people have filed civil suits against the doctor and the institutions that employed him for so long, most notably USA Gymnastics and Michigan State University. Some of the victims’ coaches and administrators were aware of complaints against Nassar, but no actions were taken against him. The victims, all women, include notable US Olympians. Aly Raisman, Gabby Douglas, McKayla Maroney, and Jordyn Wieber, four members of the “Fierce Five” 2012 gold medal-winning team stated publicly that Nassar sexually abused them.

Legal responsibility for Nassar’s crimes doesn’t necessarily end with him. USA Gymnastics and Michigan State both employed Nassar for extensive periods of time. They were legally responsible for supervising his work and investigating allegations of misconduct. Both are defendants in federal and state lawsuits brought by Nassar’s victims, and both could ultimately pay many millions of dollars to Nassar’s victims.

These institutions had legal duties imposed by statute and general case to protect these girls:

“There should have been mechanisms in place to protect these young women when they came forward and there weren’t, and that’s going to give rise to liability,” said Angela B. Cornell, a clinical professor of law and founding director of the Labor Law Clinic at Cornell Law School. “If these allegations are proven, this is a very damning case. We’re not talking about the he said-she said scenario. … This is way beyond that. This is a very damning case at what appears to be every level.”

This should be a lesson to school boards, recreation leagues, and Upward programs. Under Federal Title IX law, any educational institution, whether it be K-12 or a university, is compelled to investigate any complaint of sexual abuse or sexual violence both promptly and equitably.

Fourthly,  the leaders from these institutions have incentive to settle quickly. Following the civil cases, others may be criminally charged:

Emails, notes and witness statements could all come to public light. Distinguished academic and professional careers could be destroyed. Even more threating, evidence could surface that leads to criminal charges of USA Gymnastics and Michigan State officials. Look at how the investigation into former Penn State football coach Jerry Sandusky led to criminal charges against Penn State president Graham Spanier. While the Sandusky case was different in many ways, the idea that senior university leadership could become embroiled in a criminal investigation is surely concerning to Michigan State’s leadership.

Earlier this month, reports surfaced that the AG’s office is considering launching its own investigation to uncover how this abuse was allowed to go on for so long, whether Michigan State was aware of it, and if so, what it did when it became aware of such information.

I expect additional lawsuits to be filed, perhaps class actions. Suprisingly, I expect MSU and others want a class action. They don’t want to have to be embroiled in lawsuit after lawsuit. Per Maureen Carroll, an assistant professor at University of Michigan’s law school:

But whereas class- action suits are bound by a baseline of commonality among plaintiffs, with one person serving as the lead plaintiff on other plaintiffs’ behalf, this is not the case in the Nassar lawsuits, because not all of the victims sustained abuse in a similar set of circumstances. Some were MSU student-athletes, some were members of the U.S. National Olympic team program, for example.

“The cases will settle. I doubt we’ll see any go to trial,” said Henning, who predicts that MSU will opt for a similar remedy to what Penn State did, called global settlements.

Global settlements would mean the university would identify as many victims as it can and make an offer to pay them.

“They’ll do what every institution wants to do, which is to put it behind them. You don’t need these kinds of articles. They’d much rather have their name in the news with Tom Izzo,” Henning said. “You want everyone talking about the basketball team, not Larry Nassar. And that’s going to probably require a pretty substantial payment.”

In the case of Penn State, recent reports indicate the university has paid out north of $100 million in settlements to victims of Sandusky. Washington, D.C.-based attorney Kenneth Feinberg, who also was involved in the September 11 victims fund, was involved in that process, so he understands what goes into determining whether the university finds that within its own best interests.

But at this point, MSU is litigating the claims:

On Friday, MSU filed a motion in federal court to dismiss the multiple lawsuits standing against the university, arguing that the university should not be a defendant in those suits for a variety of reasons: the statute of limitations, the protection under Federal Title IX law and the “immunity” the university believes its employees deserve.

And then there are the purely financial implications:

AT&T has suspended its sponsorship of USA Gymnastics in the wake of a sexual abuse scandal, the company announced on Tuesday.

AT&T joins Procter & Gamble, Hershey’s and Under Armour as sponsors that have left the beleaguered national governing body since December.