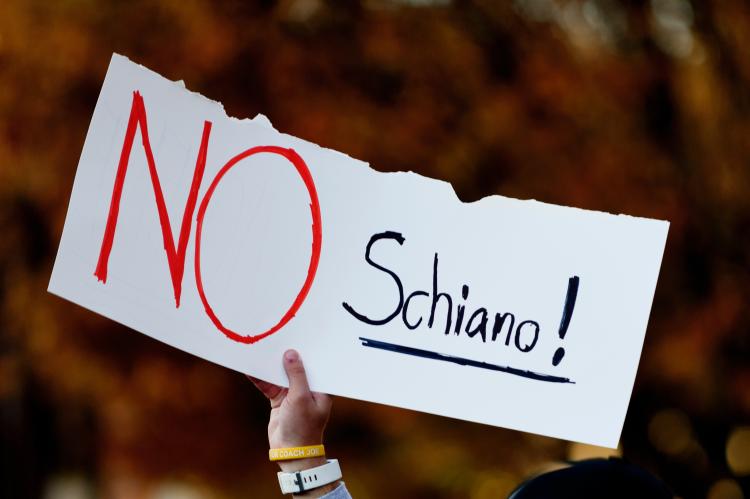 UT will pay Schiano for this hot mess; others may find themselves on the hook, too. 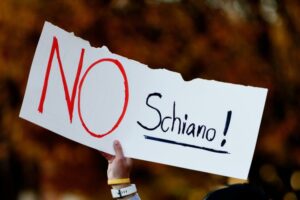 In what will surely be the talk of the Paul Finebaum show tomorrow, the University of Tennessee offered Greg Schiano the head coaching job for the football team, then, after an unprecedented uproar (security was even called to the administration building),  UT backed out of the deal. According to reports,

Tennessee reportedly had a deal in place to make Ohio State defensive coordinator Greg Schiano its new coach on Sunday afternoon, but now multiple reports say that agreement is off.

And there is more than a little legal wrinkle to this saga:

However, things were apparently advanced enough that Schiano’s camp is looking for compensation from Tennessee for calling off the deal.

And Schiano may have some other claims against others, in addition to breach of contract with UT, because his reputation is being tarnished as a result of this debacle. (“You have legislators, some big-time players who have gotten involved.”)

There was one particularly pointed protest to Schiano’s hiring, referencing Schiano’s alleged knowledge of the Jerry Sandusky scandal when he worked for Penn State from 1991-95.

In contract law, it might be possible to recover so called special damages which are unique to the injured party’s particular circumstances. But it’s only possible when the defendant knew or should have known of the special circumstances at the time when the defendant entered into the contract, and these type of damages must be reasonable. As a general rule, damages will not be awarded to compensate for the mental distress or emotional trauma that may be caused by a breach of contract.

However, in this case, there may be what is known as tortious interference with contract. Parties of a contract have the reasonable expectation that others will not interfere with the contractual relationship. The theory of this doctrine is that the parties to a contract have a property right therein, which a third person has no more right maliciously to deprive them of, or injure them in, that he would have to injure their property. Such an injury is a tort from which compensation can be sought in court.

The relations protected against intentional interference by the rule stated in this Section include any prospective contractual relations, except those leading to contracts to marry, if the potential contract would be of pecuniary value to the plaintiff. Included are interferences with the prospect of obtaining employment or employees, the opportunity of selling or buying land or chattels or services, and any other relations leading to potentially profitable contracts. Interference with the exercise by a third party of an option to renew or extend a contract with the plaintiff is also included. Also included is interference with a continuing business or other customary relationship not amounting to a formal contract.”

The Tennessee courts have specifically held:

Moreover, in the attempt to provide further guidance, we cite the following methods as some examples of improper interference: those means that are illegal or independently tortious, such as violations of statutes, regulations, or recognized common-law rules, see id. at 308; violence, threats or intimidation, bribery, unfounded litigation, fraud, misrepresentation or deceit, defamation, duress, undue influence, misuse of inside or confidential information, or breach of a fiduciary relationship, see Duggin, 360 S.E.2d at 836 (citing Top Serv. Body Shop, Inc., 582 P.2d at 1371 n.11); and those methods that violate an established standard of a trade or profession, or otherwise involve unethical conduct, such as sharp dealing, overreaching, or unfair competition, see id. at 837.” (emphasis mine)

Since interference with a contract is a tort, there are several remedies available to the injured party, including both legal damages and equitable remedies; these may include: injunctive relief, economic losses for loss of profits, financial losses, potential punitive damages, etc. The damages recoverable for intentional interference are not measured by contract rules. The injured party can recover from the tortfeasor: the pecuniary loss of the benefits of the contract; consequential losses for which the interference is the legal cause; and, emotional distress or actual harm to reputation if they are reasonably to be expected to result from the interference.

In Tennessee, they have a statutory cause of action for intentional interference with contract. 47-50-109 reads:

It is unlawful for any person, by inducement, persuasion, misrepresentation, or other means, to induce or procure the breach or violation, refusal or failure to perform any lawful contract by any party thereto; and, in every case where a breach or violation of such contract is so procured, the person so procuring or inducing the same shall be liable in treble the amount of damages resulting from or incident to the breach of the contract. The party injured by such breach may bring suit for the breach and for such damages.

Treble means: three times the damages which it would receive just for its breach of contract case.

Who ever the legislators and big-time players were, I wouldn’t be bragging about it.

UPDATE: Sports Illustrated provides a little more thorough analysis of these issues. (Although I think they get the interference with contract claim wrong. According the article, Tennessee had a Memorandum of Understanding with the basketball coach; that MOU requirement required the university must pay the coach $1 million per contract year for each remaining year of the contract if the university pulled out.