“Arrest! Need it be said that it is a breaking point in your life, a bolt of lightning which has scored a direct hit on you? That it is an unassimilable spiritual earthquake not every person can cope with, as a result of which people often slip into insanity?

The Universe has as many different centers as there are living beings in it. Each of us is a center of the Universe, and that Universe is shattered when they hiss at you: “You are under arrest.”

If you are arrested, can anything else remain unshattered by this cataclysm?

But the darkened mind is incapable of embracing these dis­placements in our universe, and both the most sophisticated and the veriest simpleton among us, drawing on all life’s experience,
can gasp out only: “Me? What for?” . . .

That’s what arrest is: it’s a blinding flash and a blow which
shifts the present instantly into the past and the impossible into
omnipotent actuality.

If you are facing criminal charges, you agree with this description. You need someone to help you regain your bearings. You must protect your rights and your freedom and need lawyer with experience in criminal law to assist you.

The attorneys at Gregory Varner & Associates represent clients accused of crimes in district, court, municipal & circuit court. We have tried cases with very poor prospects of success and obtained “not guilty” verdicts. We have successfully negotiated complete dismissals of serious criminal cases and other resolutions which protect their clients’ liberty and dignity. And we have done all things in between those two outcomes. 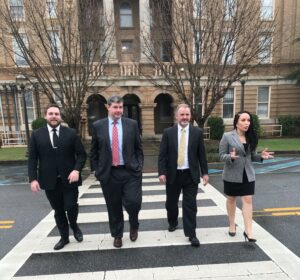 While we cannot promise any results, we do promise:

If you find yourself or your family member facing criminal charges or investigation, contact us today at 888-378-0246

And whatever you do, say these words: “I want a lawyer.” Don’t talk to the Police or Investigators without your attorney present. Don’t let your children be questioned either. (By the way, that is what the Police tell their own children.)