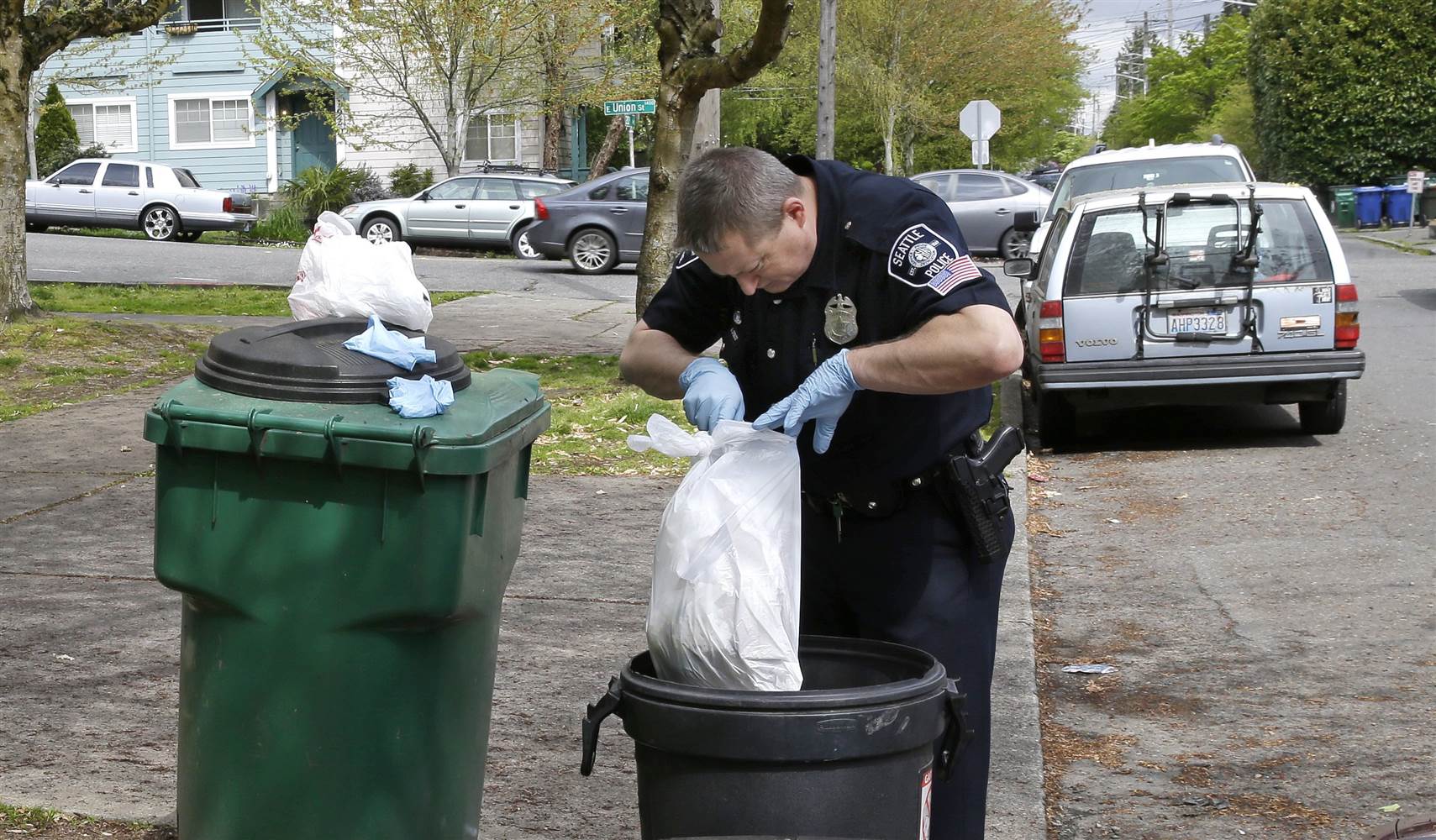 Courts allow police to search your trash, but the police don’t like it if you search their trash. 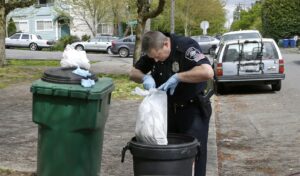 The police can and do search citizen’s trash. They do not need a search warrant. They do not even need probable cause. They do not even need reasonable suspicion. In California v. Greenwood, 486 U.S. 35, 108 S. Ct. 1625 (1988), the United States Supreme Court held that there is no legitimate expectation of privacy in garbage placed outside the house for trash collection.

Police can even enter on your property to get the trash.  As one court noted, ‘[w]hether the officers violated the Fourth Amendment does not depend solely on curtilage.’ Curtilage is area immediately around the house and kind of part of the residence. In United States v. Long, 176 F.3d 1304 (10th Cir. 1999), the court concluded, even if the trash bags were within the curtilage of the residence, they were readily accessible and visible from a public thoroughfare, thus defeating a Fourth Amendment claim. So once a person places his trash in the location for pickup by the trash collectors, where it is accessible to the public and likely to be viewed by the public, that person no longer has an objectively reasonable expectation of privacy in the trash.

Police have used trash to gather evidence on suspects for years. In a 2010 issue of Police Chief, a trade magazine for law enforcement, one article urges officers to use trash cans that are “moved from a house and to the street for disposal” as “fair game for anyone — even the police — to take it away for inspection.” The authors of the article suggest that people very often leave behind incriminating evidence in their trash unsuspectingly, and have no reasonable expectation of privacy once the trash hits the curb.

After learning of their local police department’s SOP for “trash pulls,” they turned the table.

In fact, it turns out that police officers throughout Oregon have been rummaging through people’s trash for more than three decades. Portland drug cops conduct”garbage pulls” once or twice per month, says narcotics Sgt. Eric Schober.. .

The question of whether your trash is private might seem academic. It’s not.Your garbage can is like a trap door that opens on to your most intimate secrets; what you toss away is, in many ways, just as revealing as what you keep.

And your garbage can is just one of the many places where your privacy is being pilfered. In the wake of 9/11, the U.S. government has granted itself far-reaching new powers to spy on you, from email to bank statements to video cameras (see”Big Brother’s in Your Trash Can,” below).

After much debate, we resolved to turn the tables on three of our esteemed public officials. We embarked on an unauthorized sightseeing tour of their garbage, to make a point about how invasive a “garbage pull” really is–and to highlight the government’s ongoing erosion of people’s privacy.

We chose District Attorney Mike Schrunk because his office is the most vocal defender of the proposition that your garbage is up for grabs. We chose Police Chief Mark Kroeker because he runs the bureau. And we chose Mayor Vera Katz because, as police commissioner, she gives the chief his marching orders.

Each, in his or her own way, has endorsed the notion that you abandon your privacy when you set your trash out on the curb. So we figured they wouldn’t mind too much if we took a peek at theirs.

Boy, were we wrong.

Perched in his office on the 15th floor of the Justice Center, Chief Kroeker seemed perfectly comfortable with the idea of trash as public property.

“Things inside your house are to be guarded,” he told WW. “Those that are in the trash are open for trash men and pickers and–and police. And so it’s not a matter of privacy anymore.”

Then we spread some highlights from our haul on the table in front of him.

“This is very cheap,” he blurted out, frowning as we pointed out a receipt with his credit-card number, a summary of his wife’s investments, an email prepping the mayor about his job application to be police chief of Los Angeles, a well-chewed cigar stub, and a handwritten note scribbled in pencil on a napkin, so personal it made us cringe.

You say: they only do this to the bad guys, so what the big deal. Combine this “right” of law enforcement to search with technology and we operate in a whole another world:

There are also digital methods of tracking people’s garbage. In some cities, trash cans are monitored with RFID devices (Radio-Frequency Identification); the chips are attached to the bins, so that computers inside trash trucks can determine and record their movements. In Charlotte, N. C., collectors monitor the chips to “track and manage cart inventory,” and determine who is actually putting their recycling bin out on the curb. Dayton, Ohio, has been tracking trash can locations since 2010, and residents who recycle are eligible for a cash prize. In Cleveland, if the chip shows a recyclable cart hasn’t been brought to the curb in weeks, a trash supervisor can sort through the trash and impose a $100 fine if the regular trash has more than 10 percent recyclable material — although no fines have yet been levvied.

How far we have come from 1949 when Justice Jackson penned these words in dissent in Brinegar v. United States:

The right of the people to be secure in their persons, houses, papers, and effects, against unreasonable searches and seizures, shall not be violated, and no Warrants shall issue, but upon probable cause, supported by Oath or affirmation, and particularly describing the place to be searched, and the persons or things to be seized.

These, I protest, are not mere second-class rights, but belong in the catalog of indispensable freedoms. Among deprivations of rights, none is so effective in cowing a population, crushing the spirit of the individual, and putting terror in every heart. Uncontrolled search and seizure is one of the first and most effective weapons in the arsenal of every arbitrary government. And one need only briefly to have dwelt and worked among a people possessed of many admirable qualities but deprived of these rights to know that the human personality deteriorates and dignity and self-reliance disappear where homes, persons and possessions are subject at any hour to unheralded search and seizure by the police.

What do you have to hide? Per Sonia Roubini of the ACLU Speech, Privacy, and Technology Project

The information unearthed from our trash bins can paint a very vivid, very private, and very potentially incriminating picture of the ways in which we spend our time.